Synapse is Penn’s only undergraduate publication devoted entirely to healthcare and medicine and written by students for fellow students, is the brainchild of Nicholas Wilcox, LSM Class of 2012. The founding of Synapse is exemplary of both the interests that drive LSM students and the latitude they have for creatively pursuing them.

Nick was drawn to LSM by his interest in healthcare, and particularly in the way complex topics in science are expressed through writing. After arriving on campus, he therefore sought to get involved with a student publication devoted to promoting discussion of healthcare issues, only to find that such an opportunity did not exist at the undergraduate level at Penn. Existing publications tended to publish articles that were highly technical and therefore not really accessible to a broad audience.

This was the impetus for the founding of Synapse in early 2009. Released each semester, it publishes diverse and complex healthcare articles that are thoroughly researched but also written in a manner that can engage and inform other students. Nick’s vision has been for Synapse to serve the Penn community by raising the profile of healthcare issues among undergraduates, and break down the barriers associated with elucidating the complex science underlying human health. Synapse also aspires to serve as a forum for intellectual discussion, stimulating student interest in new healthcare topics and even influencing the direction of their research, study, or choice of vocation.

Within just a couple of years, Nick’s aspirations have become reality. Synapse received the award for Penn’s ‘Best Academic Interest’ publication in both 2010 and 2011 by the Penn Publications Cooperative, sponsored by the New York Times. To date, Synapse has published four issues, covering topics that have ranged from point-of-care diagnostics in Tanzania to the West Philadelphia asthma epidemic. And the organization has grown to include over 40 students in active leadership positions.

Synapse’s readership now spans thousands of members in the undergraduate community, and issues are stacked in key libraries and buildings around Penn, in addition to being available online.  Equally impressive is the legacy Synapse offers to future classes of LSMers in providing a forum for them to share their passion for research in science and healthcare with their peers across the university. 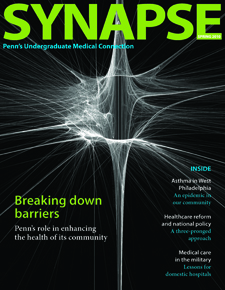 © 2022 The Trustees of the University of Pennsylvania
Penn Weblogin